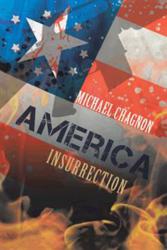 In the dramatic second book of his futuristic civil war series, author Michael Chagnon asks the question, What would a modern-day civil war in the United States look like? America: Insurrection (published by iUniverse) provides the answer.

The year is 2014 and America has just witnessed a dramatic coup by its military that has eliminated the existing government. Standing in the way of the insurgence is a group of heroic Americans who call themselves the Patriots. What follows is a classic tale of good versus evil. The story takes readers into the center of the battle to witness acts of bravery, loyalty and cold betrayal.

An excerpt from the book America:

Joe knew that a storm was coming, a storm of death and destruction.

The only thing standing between tyranny and freedom was Joe Randall and the freedom loving Patriots.

He watched as the sun crept slowly down on the horizon disappearing into the darkness, just like the Mighty United States of America.

Available at Amazon and Barnes & Noble

Michael Chagnon is the author of America: Silent Death. He holds a third-degree black belt in Tae Kwon Do and has studied the martial arts of Tang Soo Do and Jujitsu. Chagnon and his wife of 30 years currently live in central Maryland, where he works for an international airport and in his spare time, enjoys restoring classic cars.

iUniverse, an Author Solutions, Inc. self-publishing imprint, is the leading book marketing, editorial services, and supported self-publishing provider. iUniverse has a strategic alliance with Indigo Books & Music, Inc. in Canada, and titles accepted into the iUniverse Rising Star program are featured in a special collection on BarnesandNoble.com. iUniverse recognizes excellence in book publishing through the Star, Readers Choice, Rising Star and Editors Choice designations self-publishings only such awards program. Headquartered in Bloomington, Ind., iUniverse also operates offices in Indianapolis. For more information or to publish a book, please visit iuniverse.com or call 1-800-AUTHORS. For the latest, follow @iuniversebooks on Twitter.