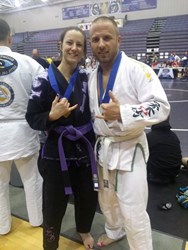 Im excited to share an art form that I love, that has enriched my life so much, says Callentine. Its an honor to now be a part of the Team Chitwood Instructor staff and Im proud to be leading the first women-only BJJ class in the Columbus area.

In their twenty years of martial arts and fitness instruction, Team Chitwood has seen womens interest in Brazilian Jiu-jitsu multiply from just one or two women per class to double-digit levels that now warrant a separate women-only class. Shawn Chitwood, President and CEO, believes this is due in part to the acceptance and increasing popularity of women in mixed martial arts during recent years.

Shawns thinking is further evidenced by the number of female competitors at the Jiu-Jitsu World Championship, which has more than doubled their count of female competitors during the last three years. Gracie Brazilian Jiu-jitsu is widely recognized as the best method of self-defense for women due to the use of leverage and technique, allowing people to take down an attacker of any size or stature.

This class offers active women, many of whom were high school and college athletes, an opportunity to fill that competitive drive while learning valuable self-defense skills and also getting fit, said Chitwood. Women actually make better BJJ students and practitioners because they have 50% less muscle mass in the upper body than men, and are forced to rely on technique more than strength.

Team Chitwoods women-only class will be held Thursday nights at 6pm following the academys series of kids and teens martial arts classes, and prior to the adult co-ed class. These Gracie Brazilian Jiu-jitsu classes are offered in addition to other fitness and self-defense programs. Last month, Team Chitwood trained women from all over the Columbus area in defensive tactics to help prepare them for safe holiday shopping (and the unfortunate crime increase during the season). Many of the womens-only BJJ and self-defense participants are wives of husbands in the adult classes, mothers of children in youth and teens martial arts classes designed for anti-kidnapping and anti-bullying instruction.

About Heide Callentine: Heide began training with Team Chitwood 12 years ago, improving her skill in between college and raising a son. She has trained consistently for the past four years with Team Chitwood and has earned the ranks of Gracie Jiu-jitsu Purple Belt and Combat Jujitsu Level 3. Just last month, Heide won the title in competition for AGC State Brazilian Jiu-jitsu Champion Adult Middleweight Women. Heide is also a registered nurse with Wexner Heritage Village.