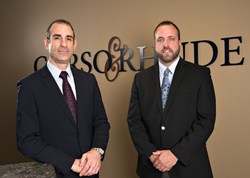 Commercial trucking is expanding in Arizona and more CDL violations are being issued, according to the Arizona traffic lawyers at Corso & Rhude.

The Arizona law firm saw an increase in the number of violations it handled in 2013. It expects that trend to continue in 2014, based on positive trends such as the recent surge in commercial trucking employment.

“As the economy continues to improve, more durable goods will need to be shipped,” said founding partner John M. Rhude, Esq. “That increase, along with the rise in enforcement by Arizona police officers, will force more and more commercial drivers to exercise caution on Arizona’s roadways.”

Rhude said 2013 showed his firm that more and more Arizona DPS officers are pulling over-the-road drivers off the road, taking them out of service for hours, running equipment and safety checks that are more stringent than any other state.

We understand that it can be frustrating to be held up on the side of the road for hours during equipment checks, having your privacy violated by officers going through your personal belongings and trash cans looking for food and gas receipts that they can use against you for an Arizona CDL ticket, Rhude said.

Trucking companies that run large operations nationwide often times will release drivers for getting even a single ticket.

The fact of the matter is that if you have a CDL license and you drive for a living, you are a professional driver, added Christopher P. Corso, Esq. Your training skills and experience help to keep our roads safer.

The FMCSA Compliance Safety Accountability (CSA) Program, launched in December 2010, has been met with criticism, Rhude said. One of the key components of the CSA program is the Safety Measurement System (SMS).

The SMS uses seven safety improvement categories (called BASICs by the CSA) to examine a carriers on-road performance and potential crash risk. The BASICs include:

The CSA program tracks drivers through a scoring system, with a graduated point system that assigns more points based on the severity of the infraction. Any offense can affect a points total, including something as simple as a marker light being out in the middle of the day.

The points stay on a driving record for three years and are added as the driver receives them. Since the CSA program is public record, anyone can view driving points. This makes a driving record and points totals available to current and future employers.

“Arizona CDL speeding tickets and other moving violations can be catastrophic to a driving record and employment,” Rhude said. “Trucking companies look at all violations from the perspective that their insurance rates are going to go up. If an employer has to spend more money to insure a driver because of Arizona CDL tickets, it often times can be a breaking point for them, causing good drivers with years experience to lose their job.”

Adding to the complexity of the issue is that many drivers are stopped for speeding along the Arizona/California border. Corso & Rhude attorneys often defend Arizona CDL tickets that are issued in Yuma, Quartzsite and Kingman. Because California is one of only two states that still mandates a speed limit of 55 for commercial trucks, Arizona DPS officers know that Arizona CDL tickets will increase if they patrol the states borders.

Police officers statewide have recently concentrated their efforts on Interstate 10 and Interstate 40 especially along the New Mexico and California borders. Arizona CDL tickets are profitable for Arizona.

All trucking violations are designated criminal misdemeanors in Arizona. Having a criminal record in most cases can result in loss of employment.

Under Arizona law, CDL drivers are not eligible for Arizona defensive driving school under any circumstances even if their ticket was given to them while driving their personal vehicle. Corso & Rhude is well known for working with trucking companies throughout the United States. Whether one is an owner/operator, driver, or an owner of a company with a driver that has been ticketed, Corso & Rhude can help.