Without virtues there are no martial arts. This is one of the most important lessons that all martial arts instructors should teach their students. Being from a Kempo background it is easy to see the inherent truth in this statement, in that the very creation of Kempo stems from this idea. Looking at the beginning statement from a historical point of view gives it credence for the martial artists of the past and the present.

END_OF_DOCUMENT_TOKEN_TO_BE_REPLACED

In the history of Japan there are many traditions. Prior to the development of Jujutsu as a separate art there were originally many variations of the empty hand arts in the country. It is said that the oldest primary fighting art was called Kumi Uchi, meaning grappling and striking. Once the Samurai took to wearing armor for protection against arms, the art developed into Yoroi Kumi Uchi, meaning armored grappling and striking.

END_OF_DOCUMENT_TOKEN_TO_BE_REPLACED

How can I defend myself with the techniques I am learning? This is one of the most commonly asked questions by beginners in the martial arts. Even the most basic of martial arts begins with seven to ten techniques, some of the more complex ones can provide as many as fifteen or twenty techniques for a beginner to learn and perform on a test. When a beginner begins to prepare to take their test, the first thing they become aware of is how hard it is to remember their skills. This is especially true of those that teach actual self defense applications of their techniques.

END_OF_DOCUMENT_TOKEN_TO_BE_REPLACED

Being a Martial Arts Dad & Teacher

END_OF_DOCUMENT_TOKEN_TO_BE_REPLACED

Corruption Starts with a Cup of Coffee

All across this country there are Officers on duty that stop at restaurants, convenience stores, and other types of establishments and enjoy a free meal or soda simply because they wear the uniform. I know this may seem a trivial thing to many Officers, and I am sure there are many out there who feel that they are somehow entitled to this practice.

END_OF_DOCUMENT_TOKEN_TO_BE_REPLACED

Why Are Police and Security Officers Resistant to Defensive Tactics? 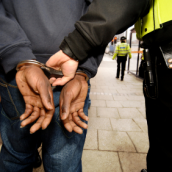 END_OF_DOCUMENT_TOKEN_TO_BE_REPLACED

The Importance of Position and Distancing

Todayâ€™s Law Enforcement and Security professionals are some of the most dedicated men and women in the world today. Each and every day they go to work with the full knowledge of the dangers that they face in a days time. Yet, they still forge on and fulfill their duties knowing that they are the last line of defense for the average citizen against societyâ€™s criminal and violent element.

END_OF_DOCUMENT_TOKEN_TO_BE_REPLACED

In the winter of 1914, a fourteen year old boy ran away from his Pennsylvania home intent on seeing the world and to accomplish this he would lie about his age and join the Army. He was a large boy, larger than most men in his community. You had to b 16 years old or have your parentâ€™s permission in those days to enlist.