Brooklyn Karate Class Teaches Kids How to Defend Against Bullying 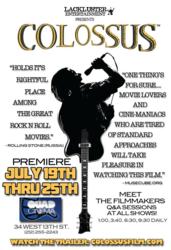 Shot in new Russia, Hendrickson creates a tightly nested narrative for the ex-pat con man, Clark Larson (played by Hendrickson), who spent the last 17 years wheeling and dealing in Russias twilight of commerce and graft. Now, at the top of his game and before his soul has completely vanished, he decides to give back something in return for all he has taken: a film to illustrate and instruct the audience in the power of bullshit, lies and intimidation.

As a means to his redemption, he wants to impart a fundamental truth: the world can be strong-armed by a very passionate and relentless few. The Bolsheviks succeeded in selling to one of the worlds largest nations a crude ideology that essentially abolished freedoma shining example of the creation of culture through manipulation and proof that anyone can step up and seize history. Our movie is an allegory of that same process.

To teach this lesson and post this warning, Hendrickson sets out (with no money) to invent a heavy- metal artificial rock band, launch its first national tour across Russia, and make a film to tell the tale.

Framed by a pixilated montage of the history of Russia since Lenin (scored by Frank Zappa) and filmed in the exotic underground world of St. Petersburg and Moscow (including Bunker 47, a Khrushchev Era nuclear bunker 18 stories below street level and now repurposed as a private club), Hendricksons deception takes on a life of its own as he engages an international crew and cast of emerging talent, sweeping them up in his schemes. He trains amateur musicians to perform like rock stars, uses a drug-addicted poet to write lyrics for his songs and exposes himself to a ruthless underworld as he succeeds in turning his artificial rock band into a national sensationall the while, tempting us to wonder, whos going to get the last laugh?

I made this movie as a celebration of doubt, Hendrickson says. A lot of endeavors celebrate faith. Im a New Yorker. I believe faith and doubt need to be kept in balance. Weve done something thats a mixture. It shows you need both.