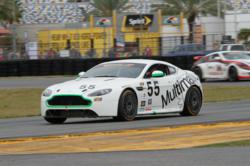 From front-wheel drive turbos to James Bonds racecar of choice, Nick Mancusos 2013 season is shaping up to be his best one yet. Joining forces with Multimatic Motorsports of Toronto, Canada, Nick is set to build upon his momentum and continue on with the same team from his 2012 campaign; albeit in very different machinery. The Aston Martin Vantage V8 Grand-Am racecar Nick and teammate Frankie Montecalvo will be driving competes in the extremely competitive GS class of the Continental Tire Sports Car Championship (CTSCC) against Porsches, Audis, BMWs and many others.

My racing career has been a bit like a game of Frogger, for better or worse quipped Mancuso. Ive had lots of ups, downs, and lateral movement these past few years but I couldnt be happier to continue on with Multimatic Motorsports. My family dealership, Lake Forest Sportscars, has been a factory authorized dealer since 1981 so I grew up with Aston as part of my DNA. Its icing on the cake that I get to race an Aston Martin in the same year that the company turns 100 years old!

Nick became involved with the accomplished Multimatic Motorsports group during the 2012 season where he was tasked with developing the Ford Focus ST-R racecar in conjunction with Ford. Just when these [Multimatic] boys thought they had gotten rid of me, I came bouncing back into the picture at the last moment Mancuso added with a smirk. These guys are the best in the business and we get along famously. Who wouldnt want to partner up with a team that has won multiple Grand-Am championships and, not to mention, a little 24 hour race over in France?

Nicks season kicks off with a 2.5 hour race at the famed Daytona International Speedway on Friday, January 25th during the legendary Rolex 24 Hours of Daytona race weekend.

The Continental Tire series is owned by NASCAR and is widely renowned for being one of the most competitive road racing series in the US. With fields oftentimes in excess of 80 cars, races all across the US alongside NASCAR/Grand-Am/ALMS, and television broadcasts on SPEED TV, Conti racing is one of the most exciting forms of motorsport out there!

Follow Nick during his 2013 season at http://www.NickMancusoRacing.com, on Facebook at Nick Mancuso Racing Fan Page, and Twitter @NickMancusoRace. For more information on Aston Martin please visit AstonMartin.com and for more on Multimatic Motorsports, visit MultimaticMotorsports.com.

Nick Mancuso joins Multimatic Motorsports in the Continental Tire Sports Car Championship this coming season having helped the team develop their factory-backed Ford Focus ST-R racecar in 2012. First getting behind the wheel in 2006, he immediately steered his way into victory lane, winning numerous races in SCCA Regional Sports 2000 competition. Mancuso has since driven in numerous professional series in both sports cars and open wheel racecars. In addition to his racing activities, Mancuso is a black belt in Shotokan Karate and an extreme adventurer with hobbies that include spearfishing, Krav Maga, skydiving and capturing/photographing reptiles in the wild. In addition, he was inducted into the Cum Laude Society in 2004 and in 2005 he was made a member of the National Honor Society and chosen as a National Merit Scholar before graduating from the University of California, Santa Barbara in 2009.